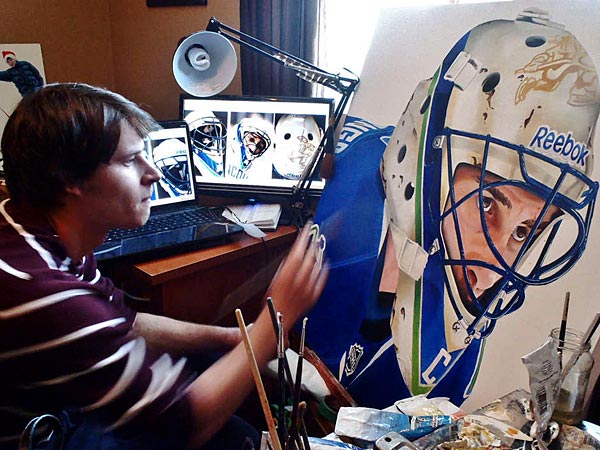 Michael Slotwinski adds finishing touches to a new piece (above) and stands with a gallery of his work.
Gallery: ‘Hockey’s Masked Men’ showcases artist’s work ahead of NHL draft

ONTARIO native and painter Michael Slotwinski was never determined to be a professional hockey player, like the 17- and 18-year-old kids whose NHL careers will begin at tonight’s NHL draft.

But while Philadelphia hosts its first draft, it also will be the first American city to host Slotwinski’s “Hockey’s Masked Men” series, which pays homage to NHL goalies past and present.

The 24-year-old artist started the series two years ago while he was a student at the University of Guelph, when he juxtaposed Boston Bruins icon Gerry Cheevers’ old-school mask with the more modern mask worn by Hall of Fame-bound goalie Dominik Hasek. The series was a hit at school, although Slotwinski had not yet developed his own style.

That came later, when he realized that he could “create new perspectives that you don’t usually find” – sometimes controversial ones – by combining angles from several photos.

One such controversial painting is of Montreal Canadien Jacques Plante, the first goaltender to wear a mask. Slotwinski portrayed an underside profile of Plante’s battered face, with his bloodstained Habs jersey underneath a gruesome-looking chin. The mask that Plante wore was primitive but it served a purpose. That’s the message Slotwinski said he wanted to send with this gory portrayal.

The Plante painting is not glorified. It looks just as the famed netminder did when he’d had enough of stopping pucks with his face and strapped on the mask.

To achieve such authenticity, Slotwinski uses a collage of photographs as an outline for what he sketches onto 3-by-3-foot wooden panels. Oil paints then fill in the sketches to create the striking gallery that you can find outside Xfinity Live! today and tomorrow.

Although his paintings didn’t sell well at first, Slotwinski has believed his work had potential ever since he first sketched Hasek for an online drawing competition that his older brother showed him. Lately, he has been enthralled with the reception he’s received at various Ontario Hockey League arenas, as well as NHL Alumni events.

Then he got a call from the Flyers, whose fan base he’s well aware of. Slotwinski’s Bernie Parent painting will surely be on display this weekend, he said. He cannot sell the paintings on site, but they are still for sale on his website, which offers commissioned original works in the hockey mask series for $1,000 to $1,500. Prints sell for $175.

Slotwinski said that the “Masked Men” series will continue, “but at the moment, I need to put it on pause because I’ve painted too many, and I’ve run out of room to store them all.”